You are here: Home / Uncategorized / ﻿﻿﻿What is Carbendazim? And why is it in my orange juice? 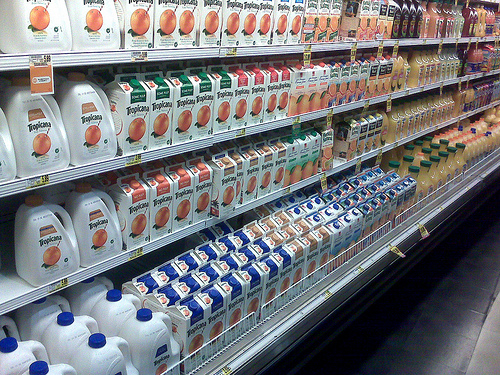 A few months ago it was arsenic in apple juice (Thanks Dr. Oz.). Now something you’ve probably never heard of may be lurking in your morning OJ.

So what’s the deal?

Carbendazim is a fungicide used to kill or inhibit the growth of fungi in many crops including citrus. While it appears the risk to humans is low, carbendazim has been shown to be carcinogenic and to negatively impact reproductive function in lab rats. There may be other risks associated with people who work on farms and have a different level of exposure.

Carbendazim is not approved for use in the United States. However, low levels of the chemical have shown up in orange juice on our shelves via juice imported from other countries (namely Brazil). While they don’t believe current levels found are harmful, the Food and Drug Administration (FDA) is testing imported juice and has vowed to detain any shipments that test positive for carbendazim.

This is not to scare you only to give the facts.

So what should you do?

You can still drink orange juice. If it makes you feel better you can juice your own oranges or just eat an orange (check the origin).

But some of us prefer to get OJ the “lazy” way.  I checked my orange juice this morning. The carton lists the source and mine says the oranges used are all from Florida. It even goes so far as saying it’s the “only major brand that doesn’t use imported oranges.”  I must admit… it makes me feel a little better.

﻿Hmmm…. maybe they saw this coming?