You are here: Home / Blog / Cheers to Cherries: A Compact Snack with a Healthy Punch 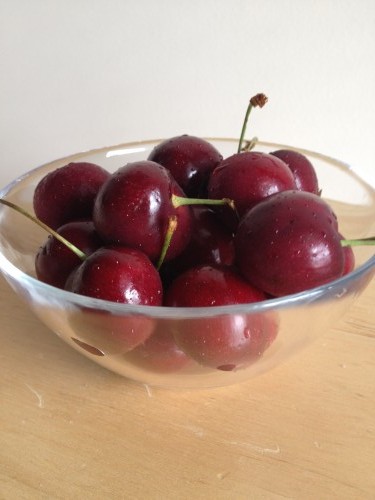 Portable, pretty and packed with nutrients, cherries are a perfect pick this time of year.

The two main types of cherries, sweet and sour, have a few subtle differences. Sweet cherry varieties include the well-known Bing cherry with its deep red, almost purple skin, Lambert, and Rainer with its distinct yellow and red skin. Montmorency cherries are a popular variety in the sour (tart) cherry camp.

Fresh cherries are in season from late May through August. In the United States, most sweet cherries are grown in five states: Washington, Oregon, Idaho, Utah and Montana. Barring any major weather events, about 90 percent of the tart cherries grown in the U.S. come from Michigan. While sweet cherries often end up in the produce aisle at the supermarket, most sour cherries are processed and available frozen, canned, dried or as juice. If you are lucky enough to come across fresh tart cherries, you’ll want to eat them within two to three days. Fresh sweet cherries will last up to 10 days in the refrigerator.

Cup for cup, sweet cherries have slightly more calories, carbohydrate and potassium, while sour cherries are higher in vitamin C. Both are a good source of fiber. Cherries definitely deliver on basic nutrition and may also provide some additional health benefits.

Pretty as can be, cherries have a reputation as a fighter — specifically for fighting or reducing the severity of inflammatory diseases like arthritis. Tart cherries have been studied for a potential positive impact on heart health, sleep, chronic inflammatory diseases and post-exercise recovery. Adding to the growing body of research, a recent study found that eating about 45 Bing cherries a day may significantly decrease certain biomarkers associated with inflammation.

Since they have a limited growing season in the United States, fresh cherries are a hot commodity in the summer and something to cherish. Fresh cherries with the stems attached make the perfect mindful snack that’s also fun to eat. Cherries make a colorful, flavorful addition to salads, salsas, smoothies, sauces, oatmeal and other whole-grain dishes. Pit and freeze fresh cherries and use them throughout the year in desserts, fruit compotes, stews and other savory dishes.