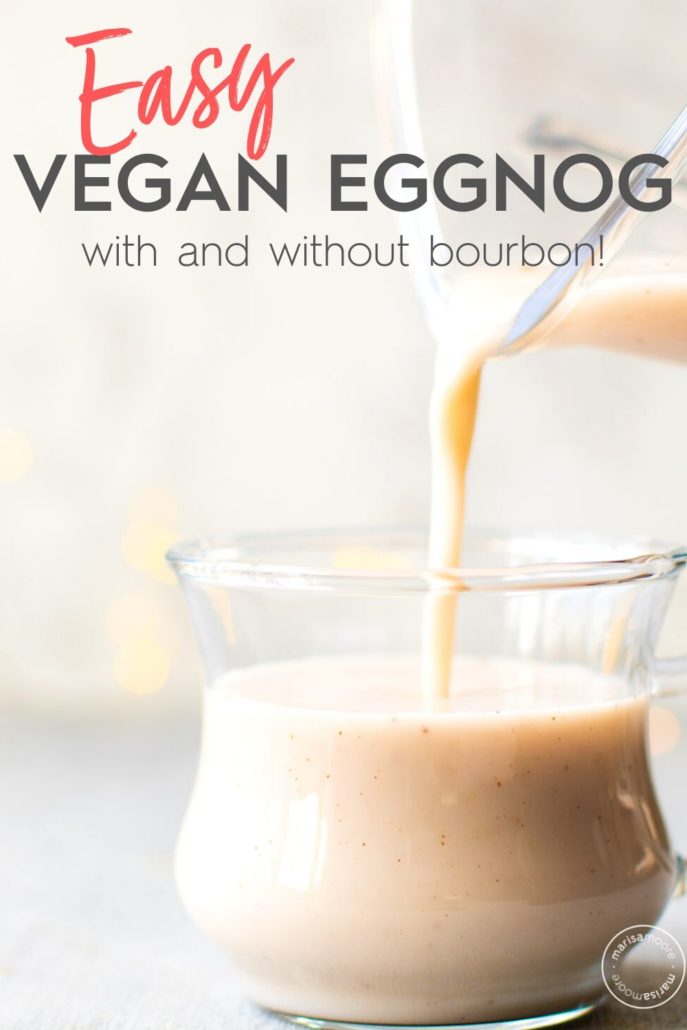 This easy vegan eggnog is made with coconut and cashew milk and warm spices for a rich and creamy holiday drink. Naturally sweetened with maple syrup, this bourbon-optional eggnog is perfect for your holiday parties. 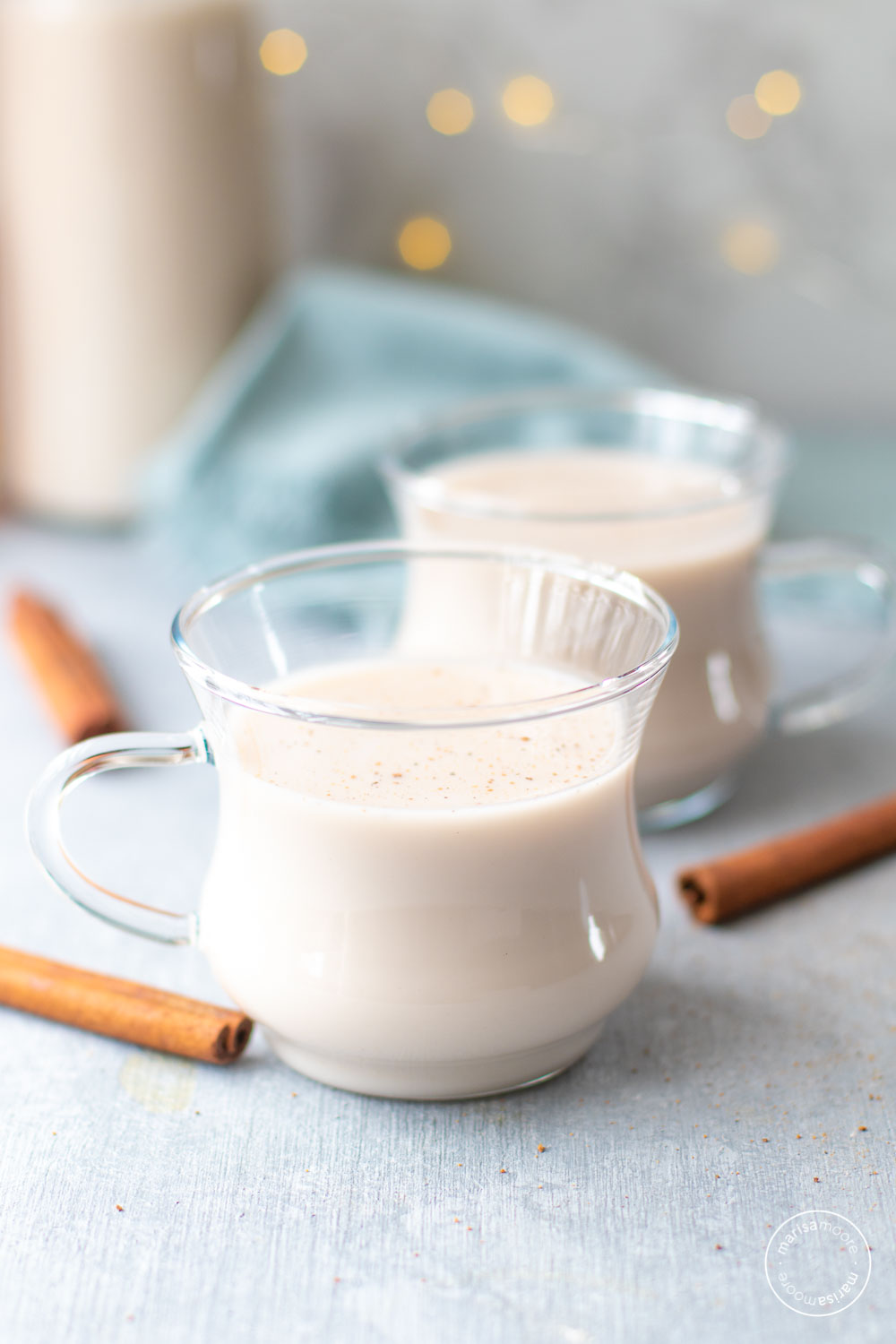 With no refined sugar, this creamy and heartwarming vegan eggnog is ready for your holiday party or a cozy night in on the couch.

You can make this eggnog with or without the alcohol – for each guest. And best of all, this drink can be made entirely in a blender for ease! Here’s what you’ll need for this easy vegan eggnog!

You’ll only need coconut and cashew milk, cinnamon, nutmeg, maple syrup, and vanilla extract to make this drink. The bourbon and coconut whipped cream are optional, but fun additions. 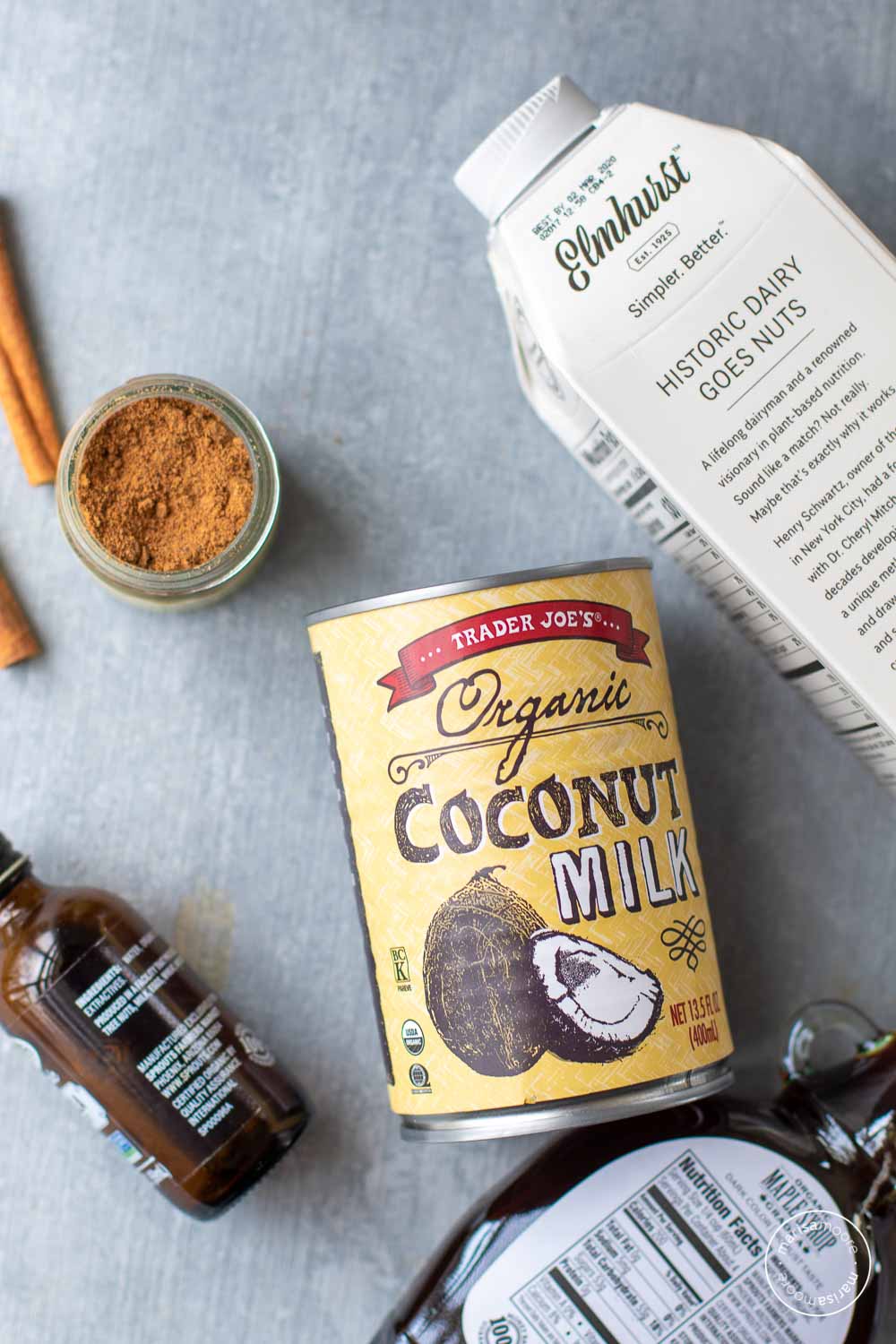 Well. Yes and no. This is not eggnog because it doesn’t have eggs. But it has the same flavors and textures of traditional eggnog – without the eggs.

Traditional eggnog is made with whole milk, egg yolks, whipped egg whites, and cream. This one is made with non-dairy milk but using the same flavors.

Every year, I see more and more vegan eggnogs hit the grocery store refrigerator shelves. And I am always so tempted to buy them all. But instead, I’ve just been looking at the ingredient list to try to make it at home. Like I love to do. One of the ones I liked is by SoDelicious. 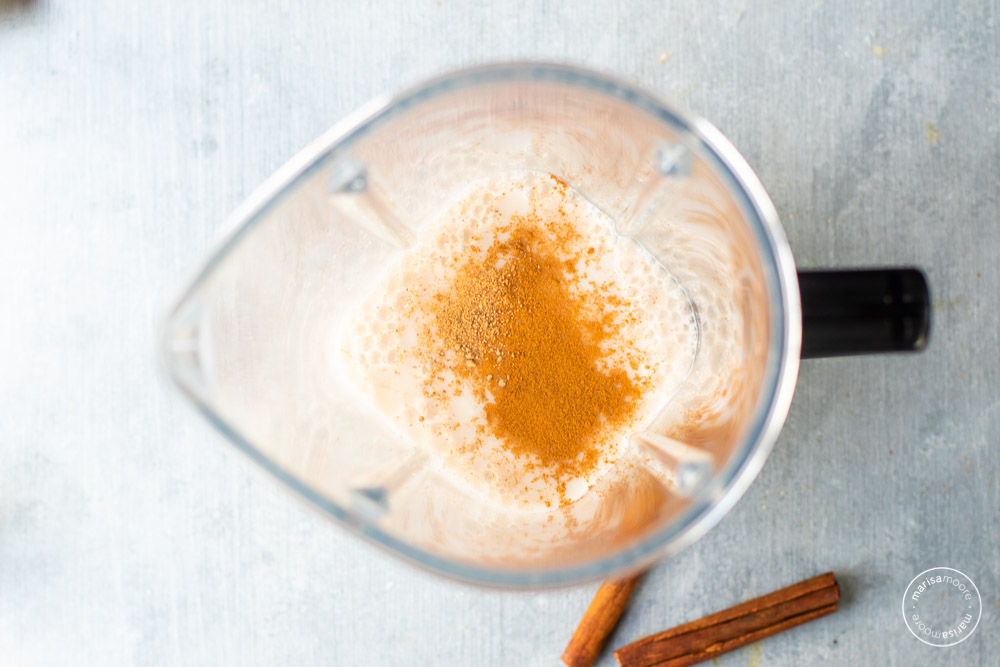 This recipe is made in a blender. You can try to whisk it in a bowl but it’s hard to get the spices to blend with a whisk.

I like to use a combination of two milk types for this drink. Coconut milk is the richest and creamiest of the non-dairy milk. Hands down. It adds the thick, rich texture mouthfeel to mimic yolks. But cashew milk is another rich one.

Coconut milk alone would overpower this drink and make it more like eggnog with a tropical flair. Not what we’re going for here.

That’s where cashew milk comes in. Cashew milk lends a lovely hint of yellow color. And it’s pleasantly creamy with a mild flavor to help tone down the coconut balance out the coconut. Almond milk would be too thin in my opinion.

If you can make homemade cashew milk that would be best. If not, I like Elmhurst brand cashew milk or an equivalent. It’s thick and creamy and doesn’t have any additives or preservatives.

I recommend Trader Joe’s brand coconut milk. It’s made with simple ingredients – just coconut and water. And it happens to be organic. 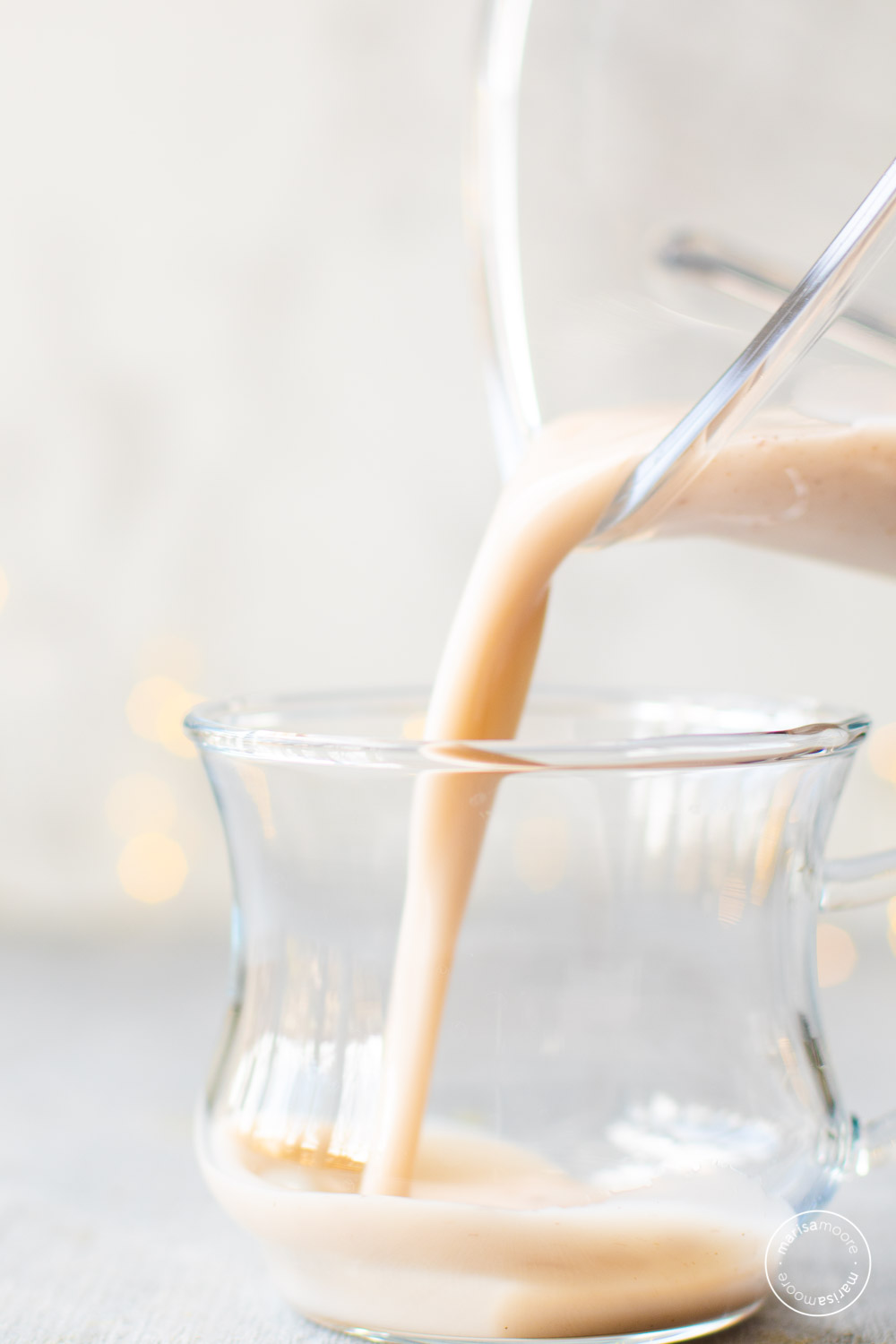 What’s the best alcohol for eggnog?

Bourbon, brandy, and dark rum are all good options to spike eggnog. Dark liquors go well with the warm spices like cinnamon and nutmeg so that’s what I’d recommend sticking with. You can of course also leave it out of this alcohol-optional drink.

This eggnog is booze optional. You can leave out the bourbon to make a non-alcoholic eggnog. It will still taste great.

And similarly, if you opt for the bourbon, go ahead and leave out the vanilla. You won’t taste it much when the bourbon is at play. 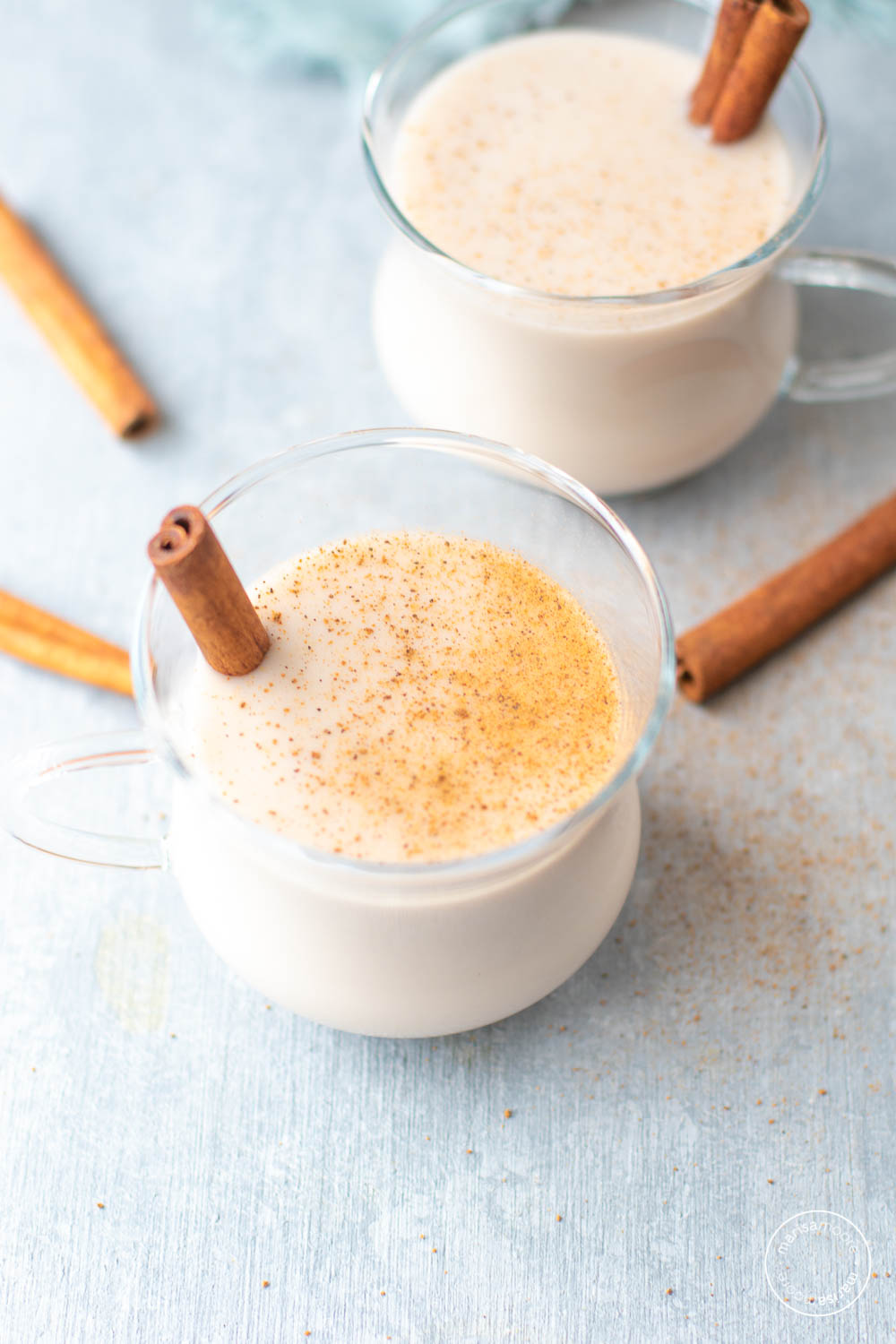 What to do with leftover eggnog

This vegan eggnog will last sealed in the refrigerator for about 4 days. Shake it up before you pour as the spices will usually settle to the bottle and the milk may separate a bit.

You can also freeze the eggnog into ice cubes to later add a little spice to a smoothie. If you’re in a warm location, you can even make a creamy slushie out of it! I won’t be doing that – Atlanta is usually warm, but not this time of the year.

Still need ideas? This article from The Kitchn has some good ideas for using up leftover eggnog – even though the examples are not necessarily vegan. 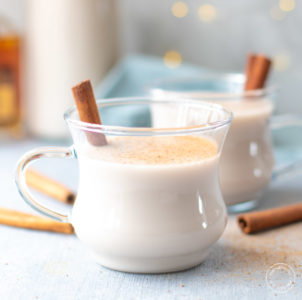